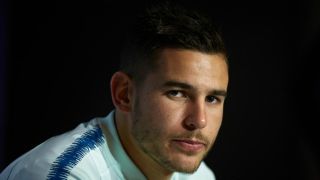 Lucas Hernandez has confirmed he is willing to consider leaving Atletico Madrid amid links to Bayern Munich.

Atletico's executive director Miguel Angel Gil Marin dismissed the possibility of Lucas departing in the upcoming transfer window but said the club would think about talks at the end of the season.

The France international is remaining tight-lipped over a possible destination.

"There are plenty of clubs in Europe that make me dream, but I will not tell you which ones," Lucas told Le Figaro.

"If have to leave tomorrow because a project interests me, I'll think about it.

"I am very happy in Madrid and Spain, where everyone has trusted me for a long time.

"But in football there are a lot of offers and every time I have to weigh up the pros and cons to make the best decision possible for me, my family and the rest of my career."

Lucas has spent his entire senior career at Atletico and was eligible to represent Spain internationally before pledging his allegiance to France, with whom he won the World Cup in Russia.

The 22-year-old attributed his international decision to Antoine Griezmann, his team-mate for club and country.

"He speaks to me constantly," the left-back said.

"He was there when I had to make one of the biggest decisions of my life, when it was necessary to choose between France or Spain and when I had no news from France.

"He made me think and changed everything. He told me that I had French blood and, if one day France called me, I should not refuse. It stayed in my head.

"If Antoine had not been there, I would have lost myself. He is my brother."