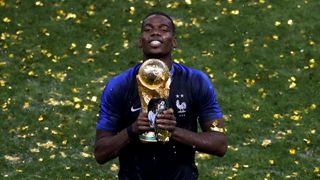 Barcelona president Josep Maria Bartomeu is satisfied with the LaLiga champions' squad despite the club continuing to be linked with Paul Pogba.

The France star captained Manchester United in their first game of the Premier League season, opening the scoring with a penalty in a 2-1 win over Leicester City at Old Trafford.

But Pogba sparked headlines when he spoke in the mixed zone after the match, suggesting he would be fined if he gave his honest opinion on club matters.

Pogba's relationship with United manager Jose Mourinho came under the spotlight regularly last term, with the midfielder benched for both legs of the Champions League exit against Sevilla.

Serie A champions Juventus have been linked with a move for their former star, while Barca are reportedly also interested in Pogba despite signing midfielders Arturo Vidal and Arthur ahead of their 2018-19 LaLiga season starting on Saturday at home to Deportivo Alaves.

And while Bartomeu is open to concluding more deals before the transfer window closes, Barca's president says the squad available to coach Ernesto Valverde is already strong.

"As you all know, the transfer window shuts on August 31 and we're keeping an eye on the market, but there's no immediate need to sign anyone," Bartomeu said.

"We're satisfied with our business in this window, both with the arrivals and departures, and I want to thank the people who are often forgotten about: our chief executive Oscar Grau, the managing director Pep Segura, our director of football Eric Abidal and his assistant, Ramon Planes.

"We are constructing an excellent squad of players with experience, both homegrown and from elsewhere. This will help us to have success.

"We have brought in young players like [Clement] Lenglet, Arthur and Malcom, who'll quickly adapt to the way of playing football here. As for Vidal, he is a player with experience, quality and character, who'll provide balance for the team.

"There are also young players like [Carles] Alena coming into the first team, with others starting to shine too, like [Juan] Miranda, Riqui Puig and Abel Ruiz. With the training we give them, I'm sure they'll reach the first team soon."

Safe to say fans are loving having on their side!What a start to life in Japan August 15, 2018

Barca icon Andres Iniesta has scored two goals in two goals for new club Vissel Kobe but Bartomeu is already looking forward to welcoming the midfielder back the Camp Nou.

"His time as a player here is over, but he'll come back to perform other tasks that we've already spoken about," Bartomeu said. "The admiration and recognition for Iniesta doesn't just come from us, but from the whole world of football."