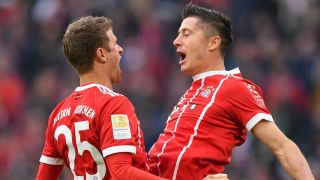 Thomas Muller offered a demonstration of his worth to Bayern Munich boss Carlo Ancelotti by starring in Saturday's 4-0 Bundesliga win over Mainz.

Bayern lost their last league meeting 2-0 to Hoffenheim and were unconvincing for long periods in seeing off Anderlecht 3-0 in the Champions League in midweek, with a number of players making their frustrations clear on the pitch.

Ancelotti has been under pressure as a result of Bayern's sluggish start to the campaign, with Hoffenheim's Julian Nagelsmann tipped as a replacement.

But it was Muller, who was dropped for the Anderlecht game and has expressed irritation at being in and out of the team, who starred in a performance that should ease the burden on Ancelotti.

Muller opened the scoring in the 11th minute with an effort that deflected in off Arjen Robben, who eventually doubled Bayern's lead after they spurned a host of first-half chances.

Robert Lewandowski effectively wrapped up the points by converting a magnificent cross from Muller, with the Pole then doubling his tally to add gloss to the scoreline.

Daniel Brosinski provided an early demonstration of Mainz's threat when his curling effort was turned around the post by Manuel Neuer, but the visitors' promising start soon dissipated and Bayern took the lead in somewhat fortuitous fashion.

Mainz failed to deal with a ball in from the left and Joshua Kimmich laid off to Muller, whose effort was deflected past Rene Adler by Robben.

Robin Quaison almost caught Bayern cold as he latched on to Levin Oztunali's throughball, only to be frustrated as Neuer kept out his powerful low drive.

Adler performed heroics to deny Robben and Arturo Vidal with a stunning double save following great work down the left from Kingsley Coman, who then appeared destined to double the advantage but succeeded only in striking the underside of the crossbar from point-blank range with the goal at his mercy.

Lewandowski then skewed wide with seemingly the entire goal to aim at, before the second goal Bayern's dominance deserved finally arrived via Robben.

Kimmich was again instrumental as he slipped in the Dutchman, who made no mistake in lofting the ball over Adler at the near post.

Just five minutes after the restart Bayern made the game safe as Muller's excellent low delivery from the right was calmly dispatched by Lewandowski.

The same combination almost supplied a fourth goal but Lewandowski narrowly missed getting on the end of Muller's centre.

Lewandowski then failed to connect with an overhead kick from Muller, with Fabian Frei providing Neuer with work to do at the other end with a vicious volley from outside the area.

Substitute Franck Ribery was denied by Adler at the near post before Vidal clattered a header against the crossbar, yet Mainz could not prevent Lewandowski from making it four by nodding in Kimmich's cross.

Sebastian Rudy would have made it five had his rasping volley not struck the woodwork and the only dissatisfaction in the Bayern camp after this performance will be that the scoreline was not even more emphatic.