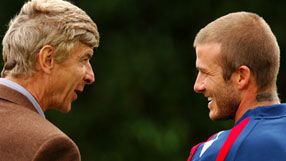 The 37-year-old midfielder is a free agent after leaving LA Galaxy at the end of the Major League Soccer (MLS) season in December.

"He has asked to come here and to work on his fitness. He has not done anything for a long time," Wenger told reporters.

"He called me. It is purely for fitness there is no speculation about him signing.

"We get nothing out of it, just to help somebody who we think deserves it and has made great service for English football."

Beckham trained with Arsenal for a short period in 2008 and with North London rivals Tottenham Hotspur two years ago.