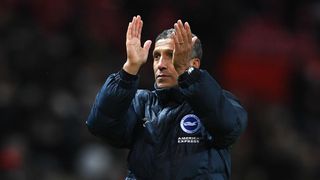 Ending a six-game winless Premier League run moved the Seagulls on to 40 points and up to 11th, with their place in the division assured for next season.

And Hughton picked out Anthony Knockaert for particular praise after an all-action display from Brighton earned a memorable victory over the FA Cup finalists.

"I've had a group of players with great belief and discipline," Hughton told Sky Sports. "This shows what it means to the team.

"We learned after the first few games we were good enough to compete and that gave us encouragement and confidence.

"When we've needed the big moments, what's helped is the two good away performances at Old Trafford, we drew at Tottenham and we've beaten Arsenal here.

"We have confidence we can compete in these big games if we get a little bit of fortune. But I thought we were outstanding tonight.

"Anthony, generally, is one who works hard for the team with the ability he's got, and every now and then he rises above that level even more. He did it even more last season but to be fair he was outstanding tonight."

FT: Albion will play their football in the next season! A second-half header from Gross sees Hughton’s team secure the points needed to guarantee safety. A brilliant performance from the Seagulls, on a special night at the Amex Stadium. 1 0 May 4, 2018

Knockaert's diligence on the wing helped Brighton restrict United mostly to shots from distance, while David de Gea had to make a series of saves.

"We worked really hard, today you can see the effort from the boys was magnificent," Knockaert said to Sky Sports. "It was a night we'll remember all our lives. To stay up against Man United is unforgettable.

"It's brilliant for us. We have great quality in the team and a player like Pascal Gross who can create things and players who work so hard for each other. Everyone loves each other and that's what makes the difference."