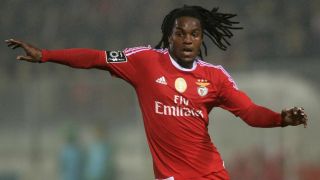 The 18-year-old has broken into Benfica's first team this campaign and is regarded as one of the biggest talents around in his age category.

His superb development has reportedly caught the attention of Premier League giants United, but Benfica are not panicking over the prospect of potentially losing the young midfielder in this transfer window.

"Renato is mature beyond his age," Rui Vitoria told SportTV. "He is being protected by a group of players who support him and are giving him a lot of help.

"This situation is not difficult for us. If things happen, they happen. We all know that's the way it is. There is no point in worrying over things that have yet to happen.

"There is no drama about all this. The team is very stable and that helps dealing with speculation like this."

Sanches came through the ranks of the Benfica youth academy and made his first-team debut in October 2015. He has since featured in 13 league matches, scoring twice.

The midfielder's contract with Benfica runs until June 2021 and contains a €45million exit clause.