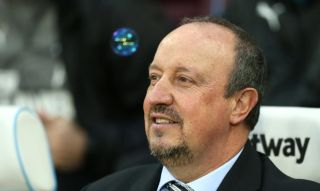 Rafael Benitez insists he is a better manager now than he has ever been as he prepares to celebrate an eventful three years in the Newcastle hotseat.

The 58-year-old Spaniard arrived on Tyneside on March 11 2016 and has lived every minute of the soap opera the Magpies have become on and off the pitch since.

Whether Benitez will extend his stay any further remains to be seen with his contract due to expire at the end of this season but, whatever happens, he is adamant that his experiences in the north east have improved him.

Asked if he was a better manager now than when he won LaLiga with Valencia, he said: “Yes, for sure.

“Now you are learning and you try to manage sometimes in the same way, sometimes in a different way. Now it is easier to watch and analyse games, but still we are doing the same.

“What does that mean? That football has changed and you have to adapt, so you have to change things. You have to learn and I am learning every day.

“My father was telling me, ‘you can do the same job for 30 years and only have one year of experience, or you can change things every year and have 30 years of experience’.

“That is exactly what it has been like for me.”

Benitez was unable to keep the Magpies in the top flight at the end of the 2015-16 campaign after being parachuted in with just 10 games to play, but he won promotion at the first attempt and guided the club to a top-10 finish back in the big time last season.

Victory over Everton at St James’ Park on Saturday would go a long way towards ending the club’s fears of being dragged into the thick of another scrap at the wrong end of the table, and further endear him to fans who are desperate for him to stay.

Asked if it would be difficult to walk away from Tyneside, he replied: “Always when you are happy in a place, it is not easy. But at the same time, you want to compete, you want to do well and you want to improve.