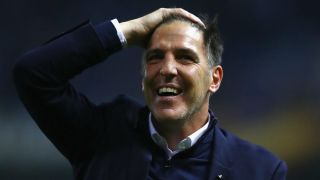 Celta Vigo boss Eduardo Berizzo believes the Europa League semi-final against Manchester United is the stuff of dreams for the Galician city.

Berizzo's men saw off Genk in the quarter-finals but head into Thursday's match at Balaidos on the back of three consecutive LaLiga defeats.

It is not ideal preparation for the club's maiden European semi-final but the Celta boss is confident his side will be able to rise to the occasion.

"If we are talking about a cup final, I think this match is just as important as that," he told a pre-match news conference. "But this has international significance too, so it is the match all our followers want to see.

"The joy and the dream is very obvious for this city. Vigo has always lived and dreamed of having something like this, so this is a great match for the city.

"A lot of our young players have more than 100 matches behind them in LaLiga, so they are ready. They have matured very quickly and that allows them to compete at this level."

Celta can be boosted by United's dismal record of two wins in 22 previous visits to Spain as the sides contest a place in the final in Stockholm at the end of this month.

"Rather than feared, I would say United are respected," Berizzo said. "We have played against great teams in this Europa League, but Man United are definitely one of the greatest.

"United change according to the rival they play against and we have to be ready for that, but we will win with identity, conviction and heart and hope that United's statistic stays as it is - two wins in Spain."

Former Manchester City youngster John Guidetti is expected to lead the attack alongside Iago Aspas, who is again enjoying himself at Celta having put wretched spells at Liverpool and Sevilla behind him.

"Iago has experienced personal maturity and that is the difference, which is more than my influence on him," Berizzo added.

"He has really assumed leadership of the team and playing on the right really liberates him.

"That enables him to combine better with the central forwards and become an important player for us."