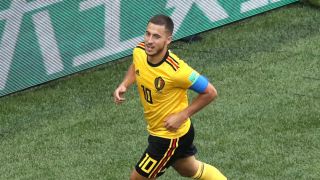 So, what will Eden Hazard do next?

The new era got up and running on Saturday at Chelsea, who are evidently intent on making up for lost time as head coach Maurizio Sarri's appointment was swiftly followed by the arrival of Italy midfielder Jorginho.

A report by the Telegraph suggests Jorginho's international team-mate Daniele Rugani and Russia star Aleksandr Golovin are next on Sarri's hitlist. But will that be enough?

"I'm waiting for new players next season," Hazard said when discussing his Chelsea future in May. "I want good players because I want to win the Premier League next season. A lot of things [can happen], then we will see."

Now on the other side of an accomplished World Cup campaign after sealing Belgium's 2-0 win over England in the third-place play-off, Hazard's club future comes back into focus. The landscape has changed – and not just at Chelsea.

Links to Real Madrid have popped and fizzed as background noise over recent years but Cristiano Ronaldo's shock transfer to Juventus means talk of the 27-year-old forward moving to the Santiago Bernabeu boom with increased clarity.

"I spoke to Eden Hazard a few days ago, he is preparing for a move to Real Madrid and it is a good move both for him and for Real," former Madridista Michael Laudrup claimed when he spoke to Sportske Novosti earlier this week.

Even amid the departure-lounge anticipation of a bronze medal match in St Petersburg, it is abundantly clear Hazard is ready to operate within that cauldron of absurd expectation and white handkerchiefs.

When he is on form – not always the case at Stamford Bridge last term but certainly a fair assessment of his Russia 2018 displays – Hazard scampers around the pitch with irresistible mischief, usually a step ahead of defenders grasping and kicking at fresh air.

England's defence missed a beat in the fourth minute as the diminutive attacker flicked a header down to Romelu Lukaku and darted towards the penalty area on an intelligent run, opening up the space for Belgium's centre-forward to pick out Nacer Chadli, who crossed to give fellow wing-back Thomas Meunier a simple finish.

Hazard set in motion a break for Kevin De Bruyne to almost make it 2-0 inside a quarter of an hour and Belgium's two playmaking kingpins generally had the match in the palm of their hands. They will be entitled to swagger back into their respective Chelsea and Manchester City dressing rooms.

That is, of course, if Hazard returns to the Blues' Cobham base. When a weary Lukaku made way for Dries Mertens, the livewire forward who made such incredible progress under Sarri at Napoli, it was tempting ponder how Belgium's number 10 would sparkle in a team guided by the celebrated Italian.

De Bruyne, Mertens and Hazard were electric on the break as England probed for a second-half equaliser and, to offer an uncomfortable reminder of the Manchester United man's FA Cup final struggles under his spell, the latter slipped away from Phil Jones to arrow a razor-sharp finish past Jordan Pickford at the near post.

It was a third goal to go with two assists and his final tournament numbers show more dribbles (54) and more dribbles completed (40) than any other player.

Securing Neymar would cause a sensation and sell tonnes of shirts, but if Madrid want a readymade attacker coolly and effortlessly enjoying his prime there is an obvious alternative.

The next act is uncertain, but whichever stage Hazard graces next it will be worth stopping whatever you are doing to watch and marvel.