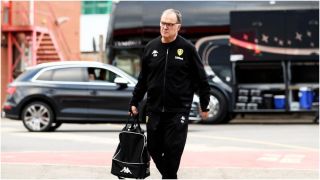 Marcelo Bielsa has admitted Leeds United have had spies watching every opponent they have faced this season.

The issue of 'Spygate' was first raised ahead of Derby County's visit to Elland Road last Friday when a Leeds employee was caught outside the Rams' training ground.

Bielsa faced widespread criticism for his actions - not least from Derby boss Frank Lampard - but, at a hastily arranged press briefing on Wednesday, the Argentine conceded it was not an isolated incident.

He said: "I observed all the rivals and we watched all the training sessions of the opponents before we played against them."

Leeds issued a statement after the Derby game reminding Bielsa of his responsibilities, while investigations have been launched by the English Football League (EFL) and Football Association (FA).

Bielsa, though, insist he was not acting illegally, and hoped his honesty would help the investigation.

He added: "I, with the goal of gaining a sports advantage, have been seen to damage fair play. I already said I was responsible for this situation. The person who did it followed my orders and I am the only responsible one.

"My behaviour has been debated and many people have made an opinion. Many have condemned the act of behaviour. They've said it was immoral and violated the fair play and cheating.

| Marcelo demonstrates the analysis his team goes through for each opponent, and how it totals more than 300 hours of work pic.twitter.com/asfGA6Wadm— Leeds United (@LUFC) January 16, 2019

"The club thought it was obliged [to make a] public excuse to Derby County. I was publicly told that my behaviour was not respecting the principles and integrity that are the basis of the club.

"Many managers and ex-footballers said my behaviour was not respectful.

"The league decided to open an investigation over my behaviour so they will evaluate if I behaved badly.

"One point I would like to talk about is that I am going to make it easy for the investigation of the league. I will give them what they need.

"My goal is to make the investigation easier. I don't think this will make it worse [with] what I am saying right now. By doing that I assume the possible sanctions they will give me.

"It's not seen as a good thing but it is not a violation of the law. I know that not everything is legal is right to do. Because you have many things that are legal but they're not right.

"I didn't have bad intentions or get a sporting advantage. I did it because it was not illegal or violating a specific law.

"Of course, I have a point of view but it does not mean mine is right. I have to adapt to the rules that are linked to the habits of English football."