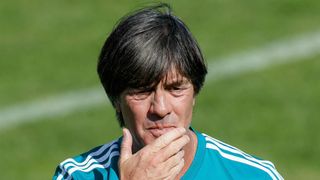 Germany team manager Oliver Bierhoff has warned against making an impulsive decision over the future of coach Joachim Low after their World Cup exit.

The defending champions exited the showpiece tournament in the opening round for the first time since 1938 after incredibly finishing bottom of Group F.

Defeats to Mexico and South Korea – either side of a dramatic win over Sweden – led to Germany's shock early elimination in Russia.

While Low extended his contract until 2022 before the World Cup, questions are now being asked about his future, but Bierhoff said Germany would not be rushed into any decisions.

"The situation regarding him is the same as after every tournament – successful or not successful, you have to let it sink in," he said on Thursday.

"On the evening of a game you can't demand an opinion. I think for many of us last night, or this morning, it was like first you say, 'What now? What do we want to do? Where do we start?'

"But then the energy returns quickly and then it's about rolling up your sleeves, improving things and bringing the team back on course."