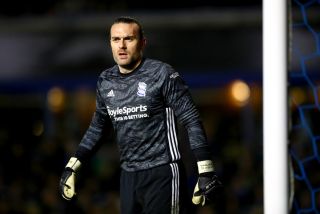 Millwall and Birmingham played out a hard-fought 0-0 draw at the Den, with the hosts unable to find their way past an inspired Lee Camp.

The Birmingham goalkeeper enjoyed an outstanding evening in south London, producing a string of saves to frustrate a Millwall side that was much better than recent form suggested.

In-form Birmingham should have been ahead within 90 seconds, on-loan Aston Villa frontman Scott Hogan beating the offside trap only to poke just past the far post.

However, despite having just two league wins at home in 2020, Millwall settled into the contest and should have made City, and Hogan, pay for his miss.

Jed Wallace was first to be thwarted by Camp, his goal-bound toe-poke clawed off the line in acrobatic fashion.

With Ryan Woods and home debutant Mason Bennett beginning to exert their influence, along with the ever-dangerous Wallace, the visiting back-line had their work cut out, especially in the air.

Hogan, with four goals in five appearances since making the move across the second city last month, struggled to hold the ball, as did his strike partner Lukas Jutkiewicz.

With no out ball, Pep Clotet’s side – second only to Preston North End in the Championship form table since the turn of the year – had to remain content with playing on the break as and when the opportunity arose, but to little effect.

Even with their recent dip in form, the Lions very much remain incentivised by a possible play-off spot and their second half showing was certainly that of a side that belied their recent woes.

City defender Kristian Pedersen had the ball in the net for his team shortly after the re-start, only to see his celebration curtailed by the assistant referee’s flag for offside, and that was about as good as it got for Birmingham.

Jayson Molumby’s drive from 20 yards took a deflection through a throng of bodies, only for Camp to push it away for a corner before he made arguably the save of the night.

A sumptuous delivery from Mahlon Romeo couldn’t have been better placed for Bodvarsson, and he met it with a clean-headed connection – but Camp was equal to it, palming it wide just as it seemed the Icelandic forward had broken the deadlock.

Millwall boss Gary Rowett rolled the dice by introducing Tom Bradshaw and Matt Smith from the bench as his men threw everything at finding the winner their performance deserved, but it wasn’t to be.