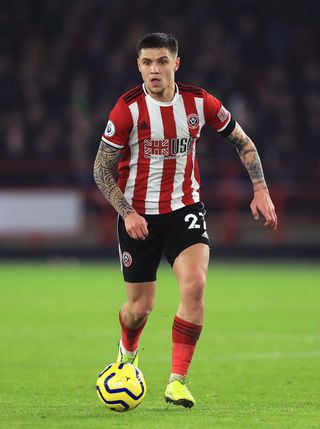 Mo Besic is confident Sheffield United are learning lessons that will make them an even better Premier League team next season.

The Blades have been the surprise package of the campaign. Many tipped them for an immediate return to the Championship but the club’s first top-flight season for 12 years has been a resounding success to date, with the side currently sitting seventh in the table.

Survival was the aim following promotion but one more victory would move Chris Wilder’s men on to 36 points – one more than the tally required to stay up last season.

Besic seems certain of another Premier League campaign and thinks the Blades could do even better in 2020/21.

“We know we are a good team and we will keep going. We just look up, we don’t look back any more. We are on 33 points and we just want to get more points as quick as possible,” said the on-loan Everton midfielder.

“This is a learning season as well. This is our first Premier League season so next season we will be even better. Step by step we will just keep going.”

The Blades lost 1-0 at home to Manchester City on Tuesday night. Sergio Aguero struck from close range midway through the second half following a sublime cross by Kevin De Bruyne.

It was a seventh Premier League defeat of the season for Wilder’s side, but four of those have been home and away to City and runaway leaders Liverpool.

Besic believes it is a sign of how far United have come that they were disappointed to lose to the reigning champions.

“It was similar like the first game, we gave them a hard game. But they had quality in the end. The pass for the goal was world class, and so was the run, and that is what was better from them,” said Besic.

“It’s a really tough place to come here and we are disappointed that we didn’t take a point. In my opinion, we should have got a point at least.

“We are a very strong group. We have been disappointed after a lot of games this season when we’ve lost because we are a really good team.”