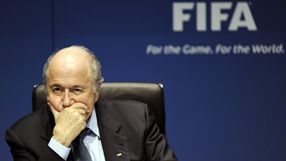 Blatter was in Kuala Lumpur to meet the head of the Malaysian Football Association (FAM) Sultan Ahmad Shah, concluding a short Asian tour as he seeks to canvas support ahead of the June 1 elections at the FIFA Congress in Zurich.

"I feel still full of energy and I've not yet finished my work in FIFA," Blatter told reporters in the Malaysian capital on Thursday.

"I'm now in my 13th year of presidency in FIFA, and the 36th year to work in FIFA, so I'm available to the congress."

Blatter is, so far, the only candidate for the role but widespread media reports suggest Asian Football Confederation head Mohamed Bin Hammam will announce his intention to run on Friday .

Blatter was not concerned at the prospect.