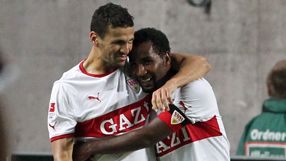 Germany forward Cacau tapped in Boulahrouz's low cross seven minutes after the restart for his third goal of the season before the rugged defender added another with a deflected shot.

The win took Bruno Labaddia's team to 13 points from eight games. Kaiserslautern are just above the drop zone on five points.

The hosts, who have won only once this season, came close in the first half with captain Christian Tiffert failing to beat Stuttgart keeper Sven Ulreich from close range and Richard Sukuta-Pasu firing wide.

Israeli forward Itay Schechter then squandered three golden opportunities in the second half, missing from point blank range on each occasion.