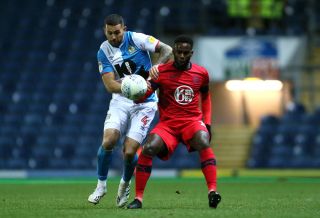 In a pulsating encounter, Rovers went ahead through Sam Gallagher’s first Ewood Park goal this season in the 25th minute, before Rhian Brewster hammered home an equaliser in first-half stoppage time.

Swansea’s top scorer Andre Ayew rolled in a penalty – his 14th goal this season – moments after the restart to turn the game on its head, and after Freddie Woodman saved his second spot-kick of the week to deny Danny Graham, it looked as though the game was up.

But Johnson’s third goal of the season five minutes into added time earned a vital draw for Rovers – stretching their unbeaten run to five and closing the gap on the top six to three points.

Elliott Bennett made his 350th career league start in place of the suspended Darragh Lenihan – one of two changes from the Stoke stalemate, while the Swans handed Jordan Garrick his first Championship start.

Ayew dragged wide from 25 yards early on after finding space, before a moment of controversy after Garrick’s careless high challenge on Christian Walton was only punished with a yellow.

Blackburn took the lead with the first shot on target in the 25th minute and Ryan Nyambe was the architect, delivering a sumptuous cross into the corridor of uncertainty, leaving Sam Gallagher with the simple task of poking home from six yards.

On-loan Liverpool forward Brewster passed up a golden opportunity to equalise when he failed to connect with Ayew’s inviting cross six yards out.

He made up for the miss on the stroke of half-time, neatly controlling Conor Gallagher’s pass 20 yards out before firing an unstoppable shot into the bottom-left corner, giving Walton no chance.

The Swans completed the turnaround three minutes after the break after Tosin Adarabioyo had brought down Garrick in the area. Ayew, cool as you like, sent Walton the wrong way and rolled it to the keeper’s right.

But Rovers were offered a route back into the game when substitute Ben Brereton was clumsily bundled over in the area by Joe Rodon in the 67th minute.

Graham took the spot-kick, but Woodman guessed correctly and parried away to his left.

They then had the woodwork to thank as Graham’s hooked effort cannoned back off the post while the impressive Conor Gallagher saw a left-footed drive sail inches wide of Walton’s far post.

Sam Gallagher planted a free header wide in stoppage time, but just as it looked as though the game was up, Johnson latched onto a loose clearance to hammer a 25-yard drive past the despairing Woodman.