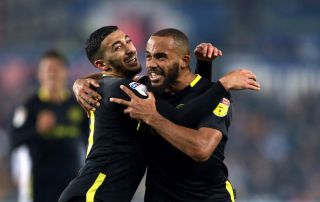 The Dane, who saw his exciting Bees side cruise to a 3-1 win over promotion rivals Swansea, said: “I can’t understand why anyone would want to leave Brentford right now.

Watkins took his tally for the season to 15 with a brace and Mbeumo scored his fifth goal in six games in an electrifying display which tore the Swans apart.

And Frank insisted: “There is more to come from them because as a front three they are just getting better and better and for me that is frightening. I’m sure we will see Said get even better in the second half of the season.”

He was delighted with the way the Bees dug in after a spirited second-half fightback to take maximum points from a “slightly tricky” situation.

“When they got the goal back we had to show the defensive side of our game but everyone in the side, even our front three, defended well and it saw us through.”

Dejected Swansea boss Steve Cooper admitted his side did not do the basics well enough against “one of the best forward lines in the division”.

The Swans boss said: “We looked short in the first half and didn’t do the basics well enough in terms of getting to the ball and putting pressure on Brentford.

“They were two soft goals, one from a set piece, but we only have ourselves to blame.”

Cooper refused to use the loss of Mike Van Der Hoorn to injury in the warm-up as an excuse, adding: “I don’t want to use that as an excuse because we are not that team or that club this year.

“Bottom line is we gave them too much respect and allowed them to play through us and get up the pitch. The fact is Freddie (Woodman) only had one save to make.

“We have to do better, but if we don’t do the basics well we won’t win any games, let alone at a place like this. Their front three are obviously talented and as good as anyone in the league on their day, especially if you give them as much room as we did.”

Cooper was disappointed with his side’s defending for the opener, with Ethan Pinnock able to lose his man and head back across goal for Mbeumo to break the deadlock.

“If you do that and give free headers away you run the risk of conceding,” Cooper said. “We try to play with the ball and defend well and we didn’t today, but we know we can do better

“Some of our football was better higher up the pitch in the second half and we looked like the team that would score, but the shots on goal weren’t enough.

“The overall feeling is that there were parts of the game we didn’t do well enough.”