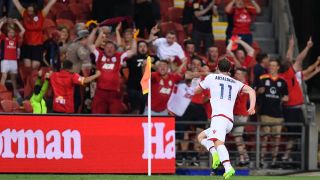 Dramatic late goals from Ryan Kitto and Johan Absalonsen ensured Adelaide United came from behind to win 2-1 at Brisbane Roar in spectacular circumstances on Friday.

Roar had seemingly done enough to claim their first A-League victory of the season after Massimo Maccarone – making his home debut after a close-season arrival from Empoli – gave them an early lead, but United stunned their hosts with a quick-fire double to seal an unlikely triumph.

It did not take Brisbane long to get off the mark with their first goal of the campaign, as Maccarone pulled off to the back post and buried Corey Brown's sumptuous left-wing cross after eight minutes.

Adelaide almost got themselves a fortuitous equaliser just before the break, but Michael Theo pounced on the ball just in time after George Blackwood met a delivery and saw his effort deflected towards goal.

Chances came thick and fast at the start of the second period – Nicholas D'Agostino wasting two openings for Roar, before United's Blackwood struck the post.

With time running out the visitors piled on the pressure and it paid off.

Kitto brought them level as he beat Theo after squeezing through a couple of defenders in the 88th minute, before Absalonsen blasted a sensatiobnal effort in off the crossbar from a tight angle to snatch a thrilling win.

STATS | had the advantage in all of the key match stats. Full stats here: October 13, 2017