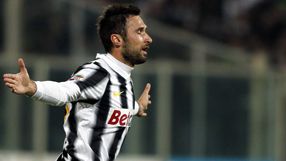 Leaders Juventus could be without Gianluigi Buffon and Mirko Vucinic for the top-of-the-table clash with Napoli on Saturday.

There are doubts over goalkeeper Buffon, who injured his left thigh while on international duty with Italy, and Vucinic is described by the club as being only 50/50 to start after not training on Thursday because of the flu.

La Gazzetta Dello Sport reported that Sebastian Giovinco or Fabio Quagliarella would line up alongside Alessandro Matri in attack and Marco Storari could take over in goal.

Napoli striker Edison Cavani is a worry for the match against the Italian champions after he arrived back late from international duty with Uruguay.

Napoli are level on 19 points with Juventus going into the game.

Lazio were fined 40,000 euros by UEFA on Thursday for racist chants from their fans during last month's Europa League match with Tottenham Hotspur.

Spurs striker Jermain Defoe, winger Aaron Lennon and second-half substitute Andros Townsend were the target of monkey chants during the match, which ended 0-0.

The Rome-based club, who take on AC Milan on Saturday, have struggled for some time with a presence of a far-right element among their support.

AC Milan will be without striker Robinho for their tricky clash against Lazio in Rome.

The mercurial Brazilian, who had just come back from injury, has a muscle problem in his right thigh. Injury-prone countryman Alexandra Pato should be on the bench for Massimiliano Allegri's side who are in 11th place on only seven points.

Francesco Totti and Daniele De Rossi are set to start AS Roma's tricky clash at Genoa on Sunday.

De Rossi was dropped for Roma's 2-0 win over Atalanta in their last Serie A match following the 4-1 hammering at the hands of Juventus.

Roma, who had been tipped to challenge for the title, are in fifth place on 11 points, eight behind Juventus and Napoli.