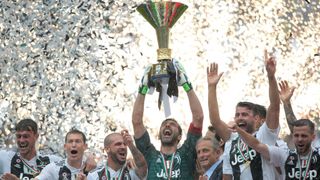 Veteran goalkeeper Gianluigi Buffon bid a final farewell to Juventus on the last day of his contract.

The 40-year-old did not renew his deal in Turin and will leave Juve after 17 seasons, nine Serie A titles and four successive domestic doubles.

Buffon has made 176 appearances for Italy and is reportedly set for a move to Ligue 1 champions Paris Saint-Germain.

However, the iconic World Cup-winning keeper's attentions were solely on Juve as he brought a lengthy and decorated chapter in his illustrious career to a close.

"I will never forget anything. I will always carry everything with me."

Juve have signed Mattia Perin to compete with Wojcech Szczesny to start between the posts for Massimiliano Allegri's team in 2018-19.

Buffon turned down a call-up for Italy's friendlies against Saudi Arabia, France and Netherlands in June, but he and Roberto Mancini remain open to working together on the international stage in the future.