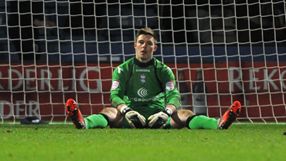 The 19-year-old is highly regarded after making his England debut against Italy in August and has been linked with a move to Premier League sides Liverpool, Newcastle United and Southampton.

BBC West Midlands said the club, who are 20th in the 24-team division, had confirmed they were willing to let first-team players leave as the search goes on for new owners.

Current owner, Hong Kong businessman Carson Yeung, had his November trial date for money laundering deferred until April by a court in his homeland.

Yeung took control of the club through Hong Kong-listed Birmingham International Holdings in October 2009 but trading in the company's shares were suspended upon his arrest in June 2011.

The BBC said the club has failed to publish their financial figures for the last two years.

Birmingham beat Arsenal to win the League Cup in 2011 but were then relegated from the Premier League months later.

Serbian striker Nikola Zigic and the club's leading scorer this season, Marlon King, are others who could leave.