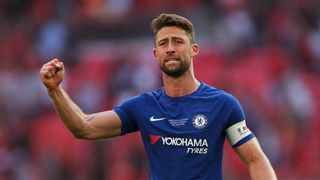 Gary Cahill says missing out on the England squad in March was the kick he needed to "dig deep" and earn a Chelsea recall, as well as a place on the plane for the World Cup.

Chelsea captain Cahill lost his spot at club level last season and was omitted by Gareth Southgate when the England coach named his last friendly squad ahead of Russia 2018.

But, after forcing his way back into Antonio Conte's plans, Cahill led Chelsea to FA Cup glory at Wembley and was then included in Southgate's final 23-man selection.

Cahill, though, indicated the World Cup was at the back of his mind when he was battling for a place with his club.

"I felt like it took a knock, missing out on that squad, especially the last squad before we meet up, it was kind of a big squad to miss out on," Cahill told reporters on Monday.

"So I realised I had to dig deep to perform at the end of the season and get myself back in the frame. That's the way it's worked out. Last time I was disappointed and there was a lot going on at that moment in time and I missed the squad, but I never didn't have any belief that I couldn't make the squad.

"First and foremost I had to get my place back at Chelsea and get back out on the pitch. It's very difficult and frustrating when you don't play regularly and I've been lucky enough to do that over the majority of my career. That's when you can influence things, good and bad.

"I have that belief and, like I've said, first and foremost it was a matter of getting in the Chelsea team. We had a huge end to the season, with the [FA Cup] final coming up. If I'm totally honest that was all that was in my head."

Despite leading Chelsea to another major honour in his second season at Stamford Bridge, reports persist that Conte will be replaced for the 2018-19 season.

"It's been a strange season, obviously there's been a lot of speculation for however many months now," Cahill said of the Italian's future.

"The season has finished on a high for us, we won a major trophy so that was a great end for everybody: for the fans, for the players and for the staff. What will be this summer, will be.

"He's been good for me, I've taken things from him, like I have the rest of the managers. I've enjoyed the success we've had together. He's been great."