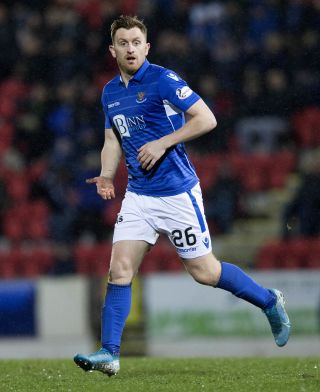 The midfielder hit the landmark during the midweek defeat by Rangers and, at the age of 33, there is scope for him to surpass former team-mate Steven Anderson’s record 441 matches.

The former Falkirk player made his Saints debut in 2007 and played alongside Davidson before returning to the club following a two-year spell at Hibernian.

“It’s incredible for Liam,” said the Saints manager ahead of Saturday’s Scottish Premiership clash at Kilmarnock.

“I probably helped him get through most of those appearances when I played with him.

“It’s brilliant. He’s the type of character you want about the place – on the training pitch, in the dressing room, on the pitch itself.

“It’s fantastic for Liam to hit that landmark and I’m delighted for him.

“St Johnstone have had a wee history of these landmarks in the last three or four years.

“The club has been able to keep three or four players for a long time, which is actually a strength because there’s always a constant in the dressing room – and if they’re good characters it’s even better.

“Andrew Considine’s another one who feels like he’s been at Aberdeen forever.

“All credit to these players for keeping going and keeping motivating themselves.”

On Anderson’s total, Davidson said: “It’s definitely realistic. One thing about Liam is he looks after himself really well – and he’s reinvented himself.

“I used to call him a holding winger, when I played with him. He used to call me the holding left-back. Neither of us moved.

“But no, he’s reinvented himself as a centre midfielder. He’s managed to adapt his game because he understands the game – he’s an intelligent football player.

“When you play wide it’s a lot of energy and a lot of running. You have to be more composed in the centre of the pitch and it’s all credit to Liam for doing that.”