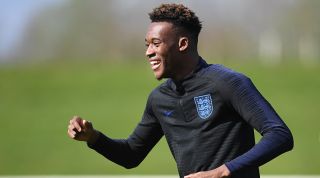 Callum Hudson-Odoi has impressed for England of late and it hasn't gone unnoticed at home and across Europe, the Mirror reports. Bayern Munich and Borussia Dortmund were already rumoured to be keeping tabs on the 18-year-old, and now Barcelona and Manchester United are being tipped to join the battle for the Chelsea winger, whose contract ends in the summer of 2020.

Phil Foden looks ready to commit his future to Manchester City as he pursues his first Premier League start. The 18-year-old has attracted interest from German clubs including RB Leipzig, the Mail says, but Foden appears to prefer taking the opportunity to prove himself to Pep Guardiola during the 2019/20 season.

Leicester, meanwhile, have fired out a warning to their rivals that defenders Harry Maguire and Ben Chilwell will not be up for grabs in the summer transfer window, according to the Mirror. Manchester United have long been linked with Maguire, while rivals Manchester City are said to have had their eye on Chilwell, but the paper says they will likely face resistance from the Foxes to any possible bids at the end of the term.

Dejan Lovren might be in line for a move to Italy, with three clubs apparently ready to swoop for the defender, the Mirror reports. After mixed fortunes at Anfield, potential offers from Roma, Napoli and Milan might be welcomed by the 29-year-old, as Joel Matip emerges as Jurgen Klopp’s favoured centre-back alongside Virgil van Dijk.

Chelsea have finally named the price they would consider selling Callum Hudson-Odoi for...

Leroy Sane: The German winger is on the verge of signing a new contract extension with Manchester City, the Mirror says, keeping the 23-year-old at the Etihad for another three years and on possible wages of £180,000 a week.

Dan James: The Swansea winger could be heading for the Premier League, with City boss Guardiola said to be making the 23-year-old a target this summer, according to the Sun.

THEN READ... The 50 worst players in Premier League history