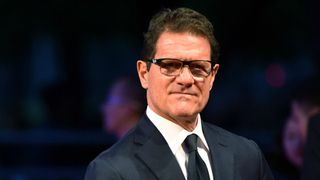 Capello, 71, headed to China in June, leading Jiangsu to a 12th-place finish in the CSL.

The Italian has no plans to extend his stay beyond 2018, confirming that would mark the end of his stint at the club.

"I have spoken with the chairman and I do not plan to renew," Capello told China's Xinhua news agency.

Capello has been linked to the Italy job and struggling AC Milan, the club he won four Serie A titles and a Champions League with as coach in the 1990s.