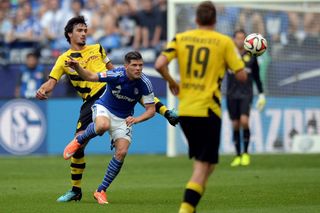 Hummels was highly sought-after during the transfer window, with Manchester United, Real Madrid and Barcelona reportedly keen on his services.

The World Cup-winning defender with Germany stayed put, and he was subsequently handed the captain's armband after Sebastian Kehl stood down.

However, talk of a transfer abroad refuses to subside as United reportedly prepare a January move for the 25-year-old.

Hummels, though, is in no rush to end his six-year stay in Dortmund.

"It's nice to hear that big clubs like that are interested in you," Hummels told Bundesliga Magazin International.

"I take that as a compliment but it doesn't influence me in any way, otherwise. We earn enough here in Dortmund.

"There will always be someone who can pay more than BVB but Dortmund have made a lot of progress during my time here. In any case I believe it's enough for me.

"If one day I start thinking about playing abroad, money won't be the reason. I don't even think about that at the moment. We still have so much further to go here."

Hummels added: "When we won the championship for a second time in 2012, each one of us could have gone wherever we wanted. But I thought: 'No, what we have here is something truly unique'.

"I'm happy I felt this way. You don't often find a team where people are really friends with each other. If you've got the chance to play at such a high level with your mates you have to hold on to that for as long as possible."