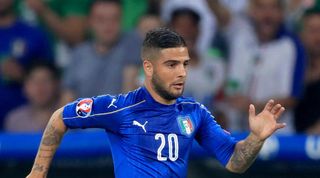 Carlo Ancelotti is reportedly eyeing up one of his former players to boost fortunes at Everton, with reports claiming he will attempt to bring Lorenzo Insigne to Goodison Park.

According to le10sport in France, Insigne is keen on the challenge of the Premier League, having been one of many players to have fallen out with Napoli owner Aurelio De Laurentiis this season.

Ancelotti worked with Insigne whilst at Napoli, nearly winning the league together last season. However, the wheels fell off this campaign, leading to Ancelotti's dismissal and reports of unrest among many senior players.

Ancelotti has said he would like to bolster Everton's squad in January, with the long term ambition being to return the club to European football. Speaking to The Liverpool Echo, he said:

“We have an idea to invest and try to improve the team but I have to speak with Marcel [Brands, Everton Director of Football] first because he has an idea, I have an idea and together we can find the right solutions.

“I think we don't need to make a lot of changes in this period.

"If there is a possibility to improve the squad with one or two players, it can be helpful, but we don't have to change a lot in this period because this squad didn't reach the level in this part of the season and I would like to help them reach their level in the second part.”

Ancelotti has been quoted that he's happy with his striking options at Everton, and hopes to develop both Dominic Calvert-Lewin and Moise Keane. However, central striker Richarlison has been the subject of speculation for a while, with former manager Marco Silva claiming Manchester United were among a number of clubs tracking the Brazillian. Should he leave, Insigne may be the man earmarked to replace him.

Explained: What is "win probability" and how does it work?