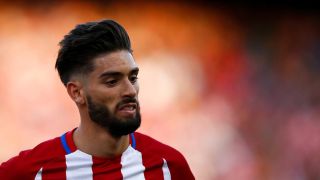 Carrasco damaged his right clavicle and had to be replaced just 16 minutes after coming on as a substitute for Nico Gaitan, with Fernando Torres replacing the Belgium international at the Vicente Calderon.

The winger will need to undergo further tests before a prognosis can be confirmed and midfielder Koke accepted Villarreal's game plan worked to perfection as Atletico's 11-game unbeaten run in all competitions was ended on Tuesday.

The hosts dominated the match with 23 shots compared to the six managed by Villarreal, but they could not find a way past goalkeeper Andres Fernandez, who was in inspired form, and Koke insisted Atletico's Champions League fate remains in their own hands, with Diego Simeone's men having a three-point cushion from fourth-placed Sevilla.

"I think we tried absolutely everything, playing long balls and keeping it on the floor," Koke said. "We didn't find the space and they hit us on the counter. When they got ahead it became more difficult.

"We're still third and we've got to play Sevilla. Nobody said it would be easy and we have to keep working, and there's a big game [at Las Palmas] on Saturday.

"In recent years when they have come here Villarreal play their game and things work well for them. Sometimes you have to accept the defeat."

Villarreal had just two shots on target but recorded their fourth straight clean sheet against Atletico, with Soriano hailing his side's strong defensive display at the Vicente Calderon after he turned home Cedric Bakambu's right-wing cross with eight minutes to play.

"We didn't have many chances - I had a few chances - this one came at the right time and it was a good cross from Bakambu," said goalscorer Soriano. "I don't really know how I put it in but I like to help the side.

"Against a team like Atletico it is very difficult and it is important for us to win this game - we stay in the places for Europe."

"The plan was to look for the counter-attack. Normally they wait for you and hit you on the counter," the forward said. "They have a lot of quality and players who can cause problems but the team knew how to suffer and we're happy with the result.

"We have to be in Europe and I think today we showed we are a team that can play football against the big clubs, huge clubs like Atletico.

"We've shown all season we can beat top teams if we are at 100 per cent. We have a few games left and we have to give everything we've got to ensure we get that European place."