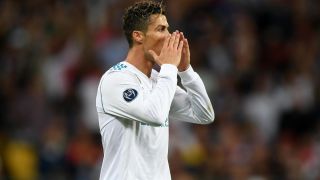 Real Madrid midfielder Casemiro revealed he had already made a bet with Cristiano Ronaldo that the superstar forward would stay with the European champions.

Ronaldo threatened to overshadow his team's 3-1 Champions League final win over Liverpool on Saturday when he cast doubt over his future.

The 33-year-old hinted at a shock exit from the LaLiga giants, despite being contracted until 2021.

But Casemiro said he was so confident Ronaldo would stay, he had already made a bet with his team-mate.

"I've already bet with him. I bet he stays," the Brazil international said.

Gareth Bale was Madrid's hero in Kiev, the Wales star scoring a brace after Sadio Mane had cancelled out Karim Benzema's opener.

The 28-year-old also suggested he could leave in search of more game time, while Madrid are linked with numerous players this close-season – including Neymar.

Casemiro said he would welcome any strong additions to the squad, but he wants more of the same from Ronaldo.

"Of course, every year people talk about who arrives and who leaves. No doubt players like Neymar, [Eden] Hazard and [Robert] Lewandowski have lots of quality," he said.

"They are always welcome here because they have a lot of quality, but what I want from Cristiano is what he has been doing.

"And in the ends in the finals, it's always the same."