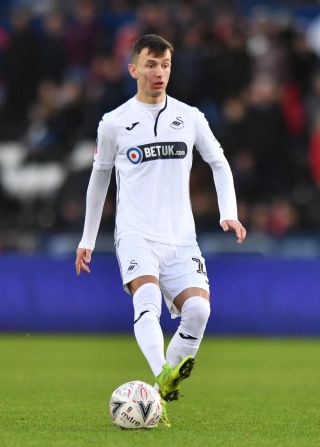 Bersant Celina hopes to be reunited with Jadon Sancho on the international stage after recognising that his former Manchester City team-mate was destined for stardom as a 14-year-old.

Swansea playmaker Celina and Borussia Dortmund winger Sancho could line up against each other on Tuesday when England meet Kosovo in a Euro 2020 qualifier at Southampton.

The pair were once City colleagues with Celina leaving Stromsgodset in Norway and Londoner Sancho having moved north from the Watford academy.

Sancho was only 14 at the time and he would eventually join Dortmund in 2017 for around £8million in the pursuit of first-team football.

“He was very young when he came and I watched him progress,” Celina told the PA news agency.

“He’s a big talent. I knew from the start that he was going to be a star.

“His talent, his technique, his confidence. He was very confident even as a young boy.

“There were some great players at City and he was up right up there with them.”

Kosovo first applied for FIFA membership in May 2008 following the ravages of war and the declaration of independence from Serbia.

But Kosovo would not play its first FIFA-sanctioned international friendly until March 2014 – a goalless draw with Haiti when a 17-year-old Celina sat on the bench.

Kosovo eventually became FIFA members two years later but did not win a game in 2018 World Cup qualifying, losing nine of their 10 matches and only scoring three goals in the process.

But Kosovo, who have climbed 70 places from their original FIFA ranking of 190, can now claim to be Europe’s form team on the back of a 15-game unbeaten run.

They beat the Czech Republic 2-1 on Saturday to move into second place in Group A of Euro 2020 qualifying, one point behind England.

“This is definitely the biggest game in our history,” Celina said of the St Mary’s qualifier.

“Everyone is looking forward to it in Kosovo, because playing against England is one of the biggest things you can do in football.

“We are playing an unbelievable side, but we have some talented players.

“I think England will win the group, but there’s a big chance for us and that’s what we’ll try to do.

Celina, who celebrates his 23rd birthday on Monday, was just 18 months old when the Kosovo War broke out in 1998.

It has been estimated that over 13,000 were killed in the conflict and around one million Kosovo Albanians fled the region.

The Celina family had lived some 20 miles from the Albanian border in the historic town of Prizren, but with the area heavily affected by the war moved to Drammen in Norway.

“The country has been through a lot and we are a proud nation,” said Celina, who represented Norway at age-grade level before switching allegiance to Kosovo.

“We feel we are doing it for our country, something that is so important.

“Everyone is very passionate in Kosovo – every person, every family, the whole country.  We know that everyone will be watching the England game back home.”