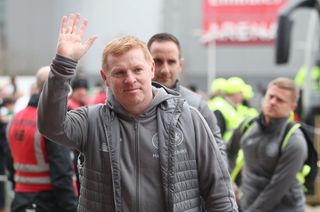 Celtic boss Neil Lennon believes the next Scotland manager should be Scottish as he ruled himself out the running for the Hampden hot seat.

The Scottish Football Association is on the hunt for a new national team boss after Alex McLeish departed on Thursday.

Asked if international management was something that would interest him, the Northern Irishman said: “No. I like the day-to day stuff.

“The Scotland job should be – whether you think this is antiquated or not – (for) a Scotland man and there is plenty of good candidates in line for the job.

“The decision to remove Alex was premature and seemed to be based on one result (3-0 defeat in Kazakhstan) which is scandalous from my point of view.

“There are a lot of good candidates out there and it is still a prime job.

“I put myself in those shoes if I was a manager my own country – it would mean everything to them.

Lennon believes that Kilmarnock boss Steve Clarke is one of several Scottish managers who are capable of rejuvenating the national team.

“There are two very good guys in the SFA building as well (Under-21 manager Scot Gemmill and performance director Malky Mackay) and there are other names out there.

Indeed, Lennon believes that becoming the man to take Scotland to the finals of a major tournament for the first time since 1998 would be “a huge incentive for anyone” and believes quality players are there for the next manager who will take over in time for the 2020 European Championship qualifiers against Cyprus and Belgium in June, with Russia also in the group.

He said: “In the modern game the respect for the managerial position, club or country, is diminishing and that saddens me but it is still a prestigious job in my view and one that a lot of people would love.

“Okay, the Kazakhstan game was a really bad day, but they beat San Marino, whether people think it is unconvincing or not, they won the game.

“They are capable of beating Cyprus, of course, capable of getting points off Russia and that sets the whole thing up again.

“I just think there is just too much knee-jerk reaction to one performance and one result.

“Andy Robertson is one of the best full-backs in Europe – Scottish.

“Ryan Fraser is ripping it up in the Premier League – Scottish, and there are a plethora of talented players playing in England as there are up here.”