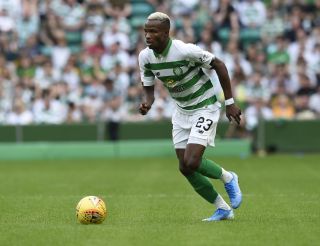 Scottish football’s return to action following the coronavirus shutdown has been thrown further into disarray after it emerged Celtic defender Boli Bolingoli took a secret trip to Spain and failed to self-isolate on his return.

The left-back came off the bench during Celtic’s 1-1 Scottish Premiership draw with Kilmarnock.

Spain was restored to the Scottish Government’s list of countries from which returning travellers must quarantine themselves for 14 days following a decision on July 25, which came into effect from midnight on July 26.

A statement from Bolingoli’s club read: “Celtic Football Club has taken its response to Covid-19 extremely seriously and we are pleased that, to date, we have recorded no positive tests.

“Our staff have given so much in this area, working tirelessly to ensure that all players and other club personnel are safe, fully aware of their own responsibilities and familiar with all guidance and protocols. Safety must always be our priority.

“Clearly, a full investigation will now take place and the club will take all appropriate action.

“Subsequent to the player’s return he has recorded two negative tests in the past week.”

Aberdeen’s game against St Johnstone on Saturday was postponed 24 hours earlier after two Dons players tested positive for Covid-19 and a further six were instructed to self-isolate following a night out in a bar.

First Minister Nicola Sturgeon warned Scottish football’s privileges to play during the safety restrictions would be put at risk if a similar situation arose.

All 12 Premiership managers and captains held talks with Scottish Government officials on Monday evening where they were reminded of their responsibilities over protocols particular to football and also the general public.

Scotland’s national clinical director, Jason Leitch, later stated that Aberdeen’s home game against Hamilton on Wednesday was not certain to go ahead given the spike of cases in the city.

Scottish football is now under serious threat of being suspended.

Justice Minister Humza Yousaf wrote on Twitter: “Utterly unacceptable from Bolingoli. With a number of incidents, Scot Govt left with little choice but to consider whether pause is now needed in resumption of the game.

Utterly unacceptable from Bolingoli. With a number of incidents, Scot Govt left with little choice but to consider whether pause is now needed in resumption of the game— Humza Yousaf (@HumzaYousaf) August 11, 2020

The Scottish football authorities are now holding more talks with the government.

“The Scottish Government is aware of reports of a Celtic FC player having broken quarantine rules last week,” a government spokesperson said.

“We are currently in discussion with the club and football governing bodies to establish the facts.

“If confirmed as another serious incident within Scottish football, where protocols have been breached at the risk of wider public health, then the Scottish Government will have little choice but to consider whether a pause is now needed in the resumption of the game in Scotland.”