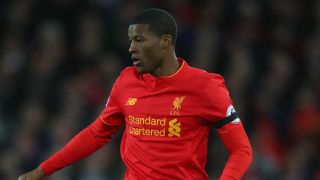 Georginio Wijnaldum says qualifying for the Champions League can be the start of something big for Liverpool under Jurgen Klopp.

The Reds know that a place in the top four will be theirs if they can beat relegated on Middlesbrough, securing a berth in Europe's premier competition for the first time since the 2014-15 campaign.

Liverpool failed to sustain a challenge for the Premier League title this season, while they also fell short in the FA and EFL Cups.

But Wijnaldum believes playing in the Champions League would represent the first step to a period of success.

"It's in our own hands and it would be a good achievement," Wijnaldum told The Liverpool Echo.

"It would be a good step for next season for us to play against better teams in the Champions League.

"Getting more experience as a team and learning to handle more matches will make us better.

"Qualifying for the Champions League would just be the start. This is the beginning of something that can go much bigger."

Liverpool thrashed West Ham 4-0 at London Stadium on Sunday but have failed to win their last three matches at Anfield.

And Wijnaldum says that should act as a warning sign against complacency when Boro visit Merseyside.

"This will be our biggest game of the season," he added.

"If we win we will be in the Champions League, so the prize is big. If we lose or draw we might miss out.

"We have a big chance but we have to get a result. We will decide where we finish this season.

"We can make it easy for ourselves if we play well and score goals. It's down to us. It's about how we start the game and how concentrated we are."