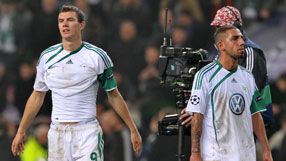 Wolfsburg will attempt to end their dismal sequence - which has included 10 games in the Bundesliga - on Sunday when they host third-placed Schalke 04, their third game in a row against a team from the top three.

Leaders Bayer Leverkusen, unbeaten after 22 league games, have a tough assignment at sixth-placed Werder Bremen on Sunday while Bayern Munich, winners of their last 13 in all competitions, are at relegation-threatened Nuremburg on Saturday.

Wolfsburg have dropped to 12th with 25 points from 22 games and are only eight points clear of Hanover 96, who are 16th and occupying the relegation playoff place.

Coach Armin Veh was fired last month and has been replaced by Lorenz-Gunther Kostner, who has been told he will keep the job until the end of the season.

"There is still no acute danger but we are not yet complacent. We still need at least three wins in 12 games," Wolfsburg General Manager Dieter Hoeness told the Bild newspaper.

"We're in the middle of the relegation fight," he told the Welt newspaper.

Nuremburg were the last reigning champions to be relegated, succumbing in 1968/69 having won the title the year before.

German media said the last time the champions were as low as Wolfsburg at the same stage of the season was in 1974/75 when a Bayern Munich team including World Cup winners Sepp Maier, Franz Beckenbauer and Gerd Mueller were 14th.

Wolfsburg's miserable run has coincided with a dramatic loss of form for Brazilian striker Grafite, who last year was voted the Bundesliga's top player, and an injury to Switzerland goalkeeper Diego Benaglio.

Two weeks ago they lost 3-1 at home to Bayern Munich - a fixture they won 5-1 the previous season - and last week suffered a 2-1 home defeat to Leverkusen, when reserve goalkeeper Andre Lenz gifted the first goal and then put through his own net for the second.

Schalke, whose coach Felix Magath led Wolfsburg to the title last season, will hope to capitalise on their opponents' poor run and close the three-points gap on the leading pair.

At the top, Leverkusen and Bayern have 48 points, the former edging top spot because their goal difference is one better.