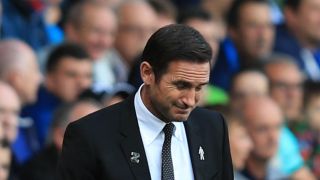 Marcelo Bielsa narrowly avoided his first defeat as Leeds United boss as Jack Harrison's 89th-minute effort salvaged a 1-1 draw for the Championship leaders away at Millwall.

Leeds have a one-point advantage at the top of the table, with Brentford and Bristol City capitalising on a slip-up from Middlesbrough - who lost at Norwich City - to move above Tony Pulis' side into second and third place respectively.

Elsewhere, Stoke City's dismal run continued - they remain just a point above the relegation places after squandering a two-goal lead against Sheffield Wednesday - while Reading enjoyed their first win of the season at Preston North End.

BIELSA REFUSES TO BE BEATEN

Bielsa-ball looked to have met its match when the Whites' arch-rivals Millwall took the lead at The Den - Jed Wallace heading the hosts in front in the 55th minute.

Leeds refused to give in though, and it was on-loan Manchester City youngster Harrison who snatched the equaliser in the final minute of normal time with his first goal for the club.

There would be more drama in stoppage time when Millwall's Tom Elliott hit the post before seeing an appeal for a penalty dismissed, but Leeds held firm to hang on to top spot and keep their unbeaten record under Bielsa intact.

BRENTFORD, BRISTOL CITY MAKE THE MOST OF BORO'S SLIP-UP

While Leeds managed to maintain their unbeaten record, Middlesbrough were not so lucky, as Teemu Pukki's effort claimed the points for Norwich at Carrow Road.

And Pulis' side are now one of three sides on 14 points, with Brentford having taken their place in second following a 2-0 home victory over Wigan Athletic - Neal Maupay at the double.

Substitute Marley Watkins proved the hero at Ashton Gate, however, as his 81st-minute header brought Sheffield United's four-game winning streak to an end, lifting City into the top three in the process.

Derby were on a roll heading into their clash with Rotherham at the New York Stadium, with three successive wins taking Lampard's side into the top six.

But it proved a frustrating trip to South Yorkshire for the Rams, and a difficult game was made harder when playmaker Lawrence was shown a straight red card for fighting midway through the second half.

Matters were made worse five minutes later when Ryan Manning converted from the spot following Craig Forsyth's foul on Richard Wood and, to cap it all off, Lampard received his marching orders late on.

OWLS FIGHT BACK, READING GET OFF THE MARK

Stoke are not adjusting well to life in the second tier, but Benik Afobe's double put the Potters in cruise control by the 22nd minute at Hillsborough.

Wednesday swiftly pulled one back through Marco Matias, though, and the pressure finally told on Stoke with eight minutes remaining when Barry Bannan curled in a free-kick.

Meanwhile, Reading finally tasted victory in dramatic style, as Leandro Bacuna's late strike secured a 3-2 victory against Preston to lift Paul Clement's side off the foot of the table.

Ipswich Town now prop up the rest following a 2-0 defeat at Hull City while Swansea City and Nottingham Forest drew 0-0.