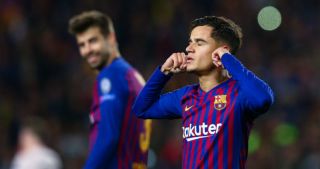 Philippe Coutinho is being lined up by Chelsea as a potential replacement for Eden Hazard.

Should the 28-year-old Belgian complete a long-rumoured move to Real Madrid this summer, former Liverpool man Coutinho could return to the Premier League, according to Telefoot (via Calciomercato.com).

The Brazilian has struggled since his move to the Catalan club in January 2018, starting just 19 league games this season, though he scored his side's third in their 3-0 win against Manchester United in the Champions League last week.

If Barcelona and Chelsea are unable to come to an agreement, Lille forward Nicolas Pepe could be an alternative for Maurizio Sarri.

The Ivorian winger has been attracting attention from a host of top clubs around Europe after netting 20 and assisting 12 more in all competitions this season.