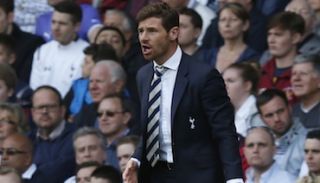 "It's a club that I have gone past," Villas-Boas told a news conference on Tuesday. "I have good and bad memories like everybody else, but it's a pity it didn't finish as I would have liked."

Villas-Boas was sacked by Chelsea in March 2012 after a poor run of results amid reports of dressing room disharmony with his coaching methods.

Former Chelsea midfielder Roberto Di Matteo took over from Villas-Boas and guided the side to an FA Cup final victory and then a memorable first Champions League triumph with a penalty shootout victory over Bayern Munich.

Villas-Boas, appointed Spurs manager in July, said he bore no grudge against his former side.

"I've told you in the past that, in a situation like we were in, normally it dictates for a manager to lose his job," he said.

"It's understandable and has happened in various clubs for the same reason with the same effect, which is immediate success afterwards.

"It's nothing new in football and is something that unfortunately works in moments of maximum difficulties.

"You either believe in what you're doing or don't believe. At that time the club had to make a decision that proved successful for them."

Villas-Boas' past and current clubs are embroiled, along with Arsenal, in a three-way battle for a top-four finish and a Champions League place.

Chelsea, on 68 points from 35 games, can effectively guarantee finishing in the top four if they beat Spurs, who are fifth on 65 points from 35 and have a far inferior goal difference. Fourth-placed Arsenal have 67 points from 36 games.

"It is still very, very open because of the remaining fixtures," said Villas-Boas.

"Obviously if Chelsea win they are in [third] which means one less spot available and we wouldn't be depending on ourselves to achieve [a top-four finish]."

Mousa Dembele and Aaron Lennon, both substituted in Tottenham's 1-0 victory at home to Southampton on Saturday because of niggles, are in the squad.

"Mousa and Aaron will be selected, whether or not they will be available is something we prefer to hold onto and let people know when we get there," said Villas-Boas.

"They had discomfort and tightness against Southampton and we decided not to risk them."