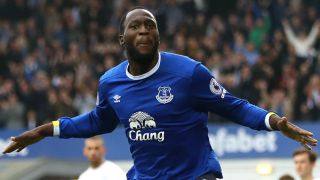 Everton have made a "promise" to allow their star striker Romelu Lukaku leave if "certain clubs" come in for him, according to his agent Mino Raiola.

Lukaku is expected to be in demand ahead of the 2017-18 campaign after turning down a contract extension at Goodison Park, with his former club Chelsea rated as favourites to sign him.

The 24-year-old netted 25 Premier League goals in an impressive season and has 43 top-flight strikes across the last two years, a record that Raiola thinks could lead to a big transfer.

"Lukaku had a promise that if certain clubs came this summer that he could leave this summer," Raiola said to talkSPORT.

"We are not in concrete talks with anybody at this moment, but hearing the market I think some clubs will contact Everton for him.

"Yeah, if the price is right for Everton and the project is right for Lukaku then I think he will want to make another step - but we are not there yet."

Raiola had previously said there was a 99.9 per cent chance of the Belgium international renewing his deal at Everton, but he explained times have changed.

He said: "You know we have the 0.1% now. At that moment we decided not to sign the contract.

"But I have to say the relationship with the club is very good and we knew if this summer someone would come and satisfy Everton then there is a possibility that he leaves, yes."

I want to thank my teammates and the staff for helping me this season! To the fans thank you for your amazing support God bless you May 9, 2017

Everton have reportedly set a massive price-tag of £100million on their prized asset and that figure did not faze Raiola, although he suggested there may be compromise if interested clubs did not reach that number.

He continued: "I didn't hear that, but it doesn't surprise me seeing what other strikers are going for.

"That's a price. It makes him the most important and expensive footballer in the world.

"If there is a club that needs Lukaku and thinks to themselves that he is worth £100m, then Everton are right.

"If not, then we will set down with Everton again and see what is reasonable."

Everton boss Ronald Koeman said earlier this month he expected to keep Lukaku, who still has two years to run on his current deal.