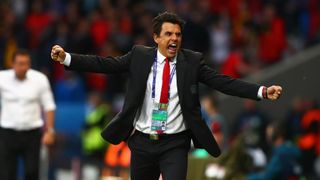 Wales coach Chris Coleman admitted his worse fears were realised when Belgium took an early lead during their Euro 2016 quarter-final on Friday.

Radja Nainggolan put the Red Devils 1-0 up after just 13 minutes in Lille before goals from Ashley Williams, Hal Robson-Kanu and Sam Voakes saw Wales run out 3-1 winners, but Coleman acknowledged he had serious concerns when Marc Wilmots' talented side took the lead.

"What you don't want to do against a team like Belgium is go one down in the first 10 minutes. They're gonna frustrate you, keep possession, you know [Eden] Hazard can do something," Coleman told his post-match news conference.

"You know they can hurt you, they score so many from counter-attacks.

"It was like our worst fears had happened, so we said, 'it's happened now, let's get on with it'."

And that is exactly what they did.

"After that, I thought we bossed the first half, they couldn't work out our rotations, we kept the ball really well. Not many can do that against Belgium," Coleman said.

"There were long periods where we were in control. We took the game to them for long periods, kept possession, and when we had to defend, we defended like soldiers. I thought it was fantastic and our boys thoroughly deserved it."

Aaron Ramsey was particularly impressive, pulling the strings in midfield, but will miss Wales' semi-final against Portugal through suspension.

"I was absolutely gutted for Aaron because he's been one of the best players at the tournament. But we said before the game that we had to do what we needed to get through," Coleman said.

"Aaron's done that, so has Ben Davies. They deserved the semi-final as much as anyone, but they did what they needed to do.

"Two yellows in five [for a ban] is a bit tough. They're big losses but they've done everything their country has asked. They can be very proud."