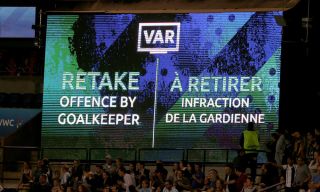 FIFA referee chief Pierluigi Collina has warned new rules on goalkeepers’ movements before penalties being subject to Video Assistant Referee reviews must be enforced by the Premier League.

The Women’s World Cup in France has seen several changes implemented following the announcement by lawmakers the International Football Association.

As well as interpretations over what is now deemed handball, another one of the changes states goalkeepers must have at least one foot on the goal-line when a penalty is taken or, if they are jumping at the time of contact, have one foot in line with it.

Scotland saw their hopes of qualification ended when Argentina came back from 3-0 down with 16 minutes left to draw 3-3 after a late penalty had been awarded with help from VAR.

It was subsequently ordered to be retaken after a save from Lee Alexander when she was adjudged to have moved off her line too soon following another VAR review.

Technology also saw France defender Wendie Renard have a second attempt at her spot kick because Nigeria’s goalkeeper had moved too soon. This was despite Renard failing to hit the target – she did not miss the retake, though, and France secured a 1-0 win from their final Group A match.

VAR is being introduced to the Premier League next season, but a spokesman recently explained to Press Association Sport that decisions on goalkeepers’ movements before penalties will be left to the on-field officials.

Video replays will only be used during penalties if the taker double-kicks the ball or feigns to shoot at the point of contact, or if there is encroachment by other players which has a direct impact on the outcome of the penalty – for example, if the goalkeeper saves the initial shot and the rebound is either cleared or scored.

The Professional Games Match Officials Limited, the organisation which trains and supplies referees to England’s top four divisions and the Football Association, will review this position during the course of the season, but it is understood it wants to avoid the confusion and delays witnessed in France this week.

However, during a lengthy media briefing at the Women’s World Cup in France on Wednesday afternoon, chairman of FIFA’s referees’ committee Collina was asked directly about suggestions the Premier League would not follow the same protocol over VAR and penalties.

The Italian, though, stressed the same rules would govern England’s top flight, just like every other competition under the FIFA umbrella.

Collina said: “I did not see any document in which this is written. The laws of the game are the same all over the world.

Collina added: “I did not read anything (different) – the laws of the game are for everybody.”