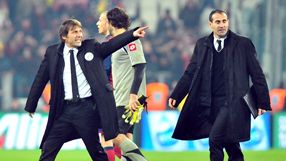 Sporting director Giuseppe Marotta was banned for three weeks for a similar outburst and defender Leonardo Bonucci was given a one-match ban for his behaviour, the league's disciplinary commissioner said in a statement on Monday.

Juventus - three points ahead of Napoli - were livid at several refereeing decisions in the game, especially the referee's failure to award them a stoppage-time penalty for handball against Genoa defender Andreas Granqvist.

Conte ran onto the pitch, ranted at officials and later described the refereeing as "shameful".

Marotta made references to the fact that referee Marco Guida is from the region of Naples.

The commissioner said that Conte, who recently completed a four-month ban for failing to report a match-fixing attempt when he was coach of Siena, had confronted the match delegate and a linesman "in an intimidatory manner".

He also insulted them and repeated his remarks shortly afterwards in the dressing room.

Marotta was banned until February 18 for similar behaviour towards the referee in the dressing room. Bonucci was found guilty of insulting the fourth official and the referee after the match.

Palermo coach Gian Pieri Gasparini was banned for one match and striker Fabrizio Miccoli for two after both were sent off for their protests over Cagliari's last-minute goal in their 1-1 draw on Sunday.

Miccoli was on the substitutes' bench at the time.