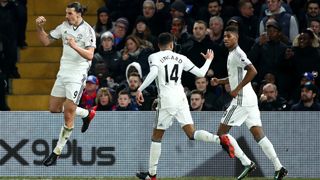 Zlatan Ibrahimovic grabbed a dramatic, late winner as Manchester United remained in touch with their rivals for Champions League qualification with a 2-1 win at Crystal Palace.

The away team led through Paul Pogba's strike in added time at the end of the first half at Selhurst Park on Wednesday.

James McArthur netted a classy and deserved equaliser for the hosts after the break, but Palace could not halt the powerhouse combination of Pogba and Ibrahimovic, who was played in by the midfielder to snatch the winner from a tight angle with two minutes to go in normal time.

Industrial action on the local railway and subsequent traffic congestion caused the visitors to arrive later than expected, but it was United who threatened first, Wayne Rooney going close with a header over the near post from Juan Mata's cross five minutes in.

Pogba, Rooney and Ibrahimovic all went close, before the France midfielder, United's standout performer throughout the opening 45 minutes, fittingly opened the scoring.

The world's most expensive player was left with a simple finish from close range after Ibrahimovic used his chest to guide a free-kick into the path of the former Juventus star.

The only major concern for Jose Mourinho was the performance of Marcos Rojo at the other end of the field, the Argentine earning a booking for crudely felling in-form ex-United player Wilfried Zaha, who proved far too hot for the hapless defender to handle.

The away team suffered a blow seven minutes into the second half when Eric Bailly, who only returned last week from two months out with a knee injury, was forced off after aggravating the same joint in the first half, Matteo Darmian his replacement.

David de Gea was called into meaningful action for the first time in the game just after the hour mark, United's goalkeeper producing a world-class fingertip save to keep a fierce McArthur drive out of the top corner of his net.

The Spanish shot-stopper was powerless to prevent Palace from equalising in the 66th minute, though, Damien Delaney's delightful backheel setting up McArthur to score after Joel Ward did brilliantly to set up the move by cutting in from the left and leaving United's defence ball-watching.

The visitors threatened to respond immediately, but fortune conspired against them. First Rooney drew an important save from Wayne Hennessey with a speculative strike from long range. Substitute Joe Ledley was then fortunate not to have a penalty awarded against him for handball from the subsequent corner, before Mata had a goal harshly ruled out for offside.

Palace appeared set to hold out for a draw before the intervention of United's superstar duo, Pogba shrugging off several challenges to slide in Ibrahimovic, the Sweden international steering a careful finish into the far corner of the net and past Hennessey, who should have done better.