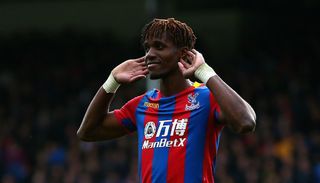 Wilfried Zaha struck in the 97th minute as Crystal Palace came from two goals down to earn a dramatic 2-2 draw at home to West Ham.

Winger Zaha's effort deep in second-half stoppage time secured a much-needed point for Roy Hodgson after the Hammers looked set for a second competitive win in as many matches.

Javier Hernandez gave West Ham a 31st-minute lead with his fourth Premier League strike this season, and Andre Ayew doubled their advantage before half-time with a stunning solo goal.

Luka Milivojevic scored from the spot after Angelo Ogbonna's trip of Andros Townsend five minutes after the restart to inspire hope for bottom side Palace.

Joe Hart repelled the Eagles' fightback with a string of stellar saves and his efforts appeared to have given Slaven Bilic breathing room after Wednesday's come-from-behind EFL Cup win over Tottenham.

But it was West Ham who this time had their lead dashed as Zaha swivelled and fired beyond Hart at the death to ensure Palace avoided a ninth league defeat.

Hodgson made eight changes to the team which was humiliated 4-1 at Championship side Bristol City on Tuesday, but the 70-year-old's plans suffered a setback as Patrick van Aanholt limped off with a suspected hamstring injury in the 11th minute.

After Zaha had a claim for a penalty turned down, the Hammers sparked into life as an overlapping Aaron Creswell picked out Hernandez with a low pass from the left for the Mexico star to poke a delightful finish past Julian Speroni with the outside of his boot.

And they were made to pay for their profligacy as a turnover in midfield allowed Ayew to stride forward, turn Scott Dann inside out, and lash a thunderous finish into the top-left corner.

West Ham's buffer lasted fewer than five minutes, though, with Milivojevic sending Hart the wrong way from the penalty spot after Ogbonna's foul on Townsend.

The match was almost turned completely on its head moments later with Yohan Cabaye spearing a shot against the left upright from the outside the area.

Hart stood up again with a vital block on Zaha's stinging shot with under 15 minutes to play before he athletically turned Cabaye's goal-bound free-kick around the post.

The England keeper seemed certain to have completed his heroics by tipping Tomkins' header against the crossbar in the dying moments, but Zaha kept his composure with effectively the final kick of the game by collecting Ruben Loftus-Cheek's pass and firing home to incredibly snatch a share of the spoils.