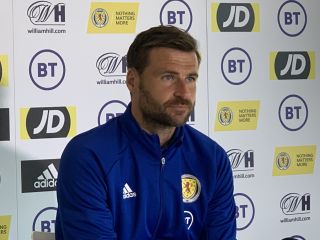 David Marshall will gladly take on the role of Scotland mentor to new boy Robby McCrorie.

The 22-year-old Rangers keeper, on loan at Livingston, was handed his first call-up by Steve Clarke last week for the Nations League double-header against Israel and Czech Republic.

McCrorie has been capped seven times at under-21 level and Derby keeper Marshall, 35, who made his international debut against Hungary at the age of 19 while at Celtic, is keen to make his young team mate’s transition to the senior squad as seamless as possible.

He said: “I didn’t know too much about him, it was the first time I had met him.

“Obviously Craig (MacGillivray) has not been playing at Portsmouth so it is a chance for Robby to come in and it is good to see fresh faces come in.

“As keepers, you are training closely every day. If Robby needed any help or advice, obviously I would be more than willing to help.

“We get a lot of time together as keepers. I know what it was like, going back a good few years now, coming into my first squad, and I had older keepers to help me.

“If I can do anything for Robbie I certainly will.”

As well as facing Israel in the Nations League, Scotland play them at Hampden Park next month in the play-off for the Euro 2020 finals which were put back a year due to the coronavirus disruption.

“We will approach it as we approach any game,” said Marshall, who moved from Wigan to Derby earlier this summer.

“Obviously there is a chance in this Nations League campaign to get a play-off (for 2022 World Cup finals) as well so it’s not as if this is a friendly game.

“It is a bit strange that we play Israel in October in the play-off but it gives us a good chance to see them.

“We know them from previous campaigns. But it will be good for lads to see individual players that we are playing against.

“It is the same for them but it gives us a chance to see them before the massive game in October.”

Scotland have not played since a 3-1 win over Kazakhstan at Hampden last November which followed wins over Cyprus and San Marino in the traditional but unsuccessful European Championship qualification campaign.

Marshall hopes any momentum taken from those three wins can be continued.

He said: “We were off the back of wins and there was a consistency coming with the players in the squad.

“The manager had more sessions on the training pitch so we were getting a bit of momentum building up for the play-off, so hopefully we can get good performances and results this month which stand us in good stead for the next one.”