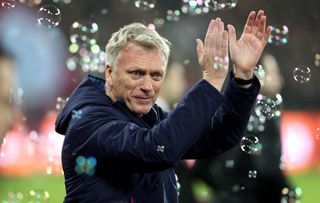 David Moyes wants West Ham to give the FA Cup equal billing to their battle for Premier League stability.

The Irons head to Sky Bet League One Gillingham on Sunday following the 4-0 trashing of Bournemouth which moved them up to 16th in the table.

Moyes has returned for a second spell at the east London club after Manuel Pellegrini was sacked with West Ham very much on a downward spiral.

The former Everton and Manchester United manager sees no reason why the team cannot target a decent cup run to help the second half of the season produce a positive outcome.

“I want to do as well as I can in the FA Cup, but I am probably no different from all the other managers who would like to win the FA Cup,” Moyes said at a press conference.

“I definitely would, and I know it’s really important here at West Ham to be competing in it. My intention is to compete with the best I can.

“We will go into it and give it a go. It’s a tough game at Gillingham and we have to try and handle that.

“For me, the FA Cup is joint equal with making sure we are as high up the Premier League as we can. We need to do everything we can to get through.

“I think every team is desperate to get through – and lower teams, with respect to Gillingham, are looking forward to getting the games with big paydays.

“But from our point of view, we are trying to win the FA Cup if we can.”

Moyes will come up against fellow Scot Steve Evans in the dugout at Priestfield, but intends to get the better of his old friend.

“Steve was a player at Celtic Boys Club like me. We go back to that time and we played against each other at different times,” he said.

“He used to come over a lot when he was at Rotherham and I was at Manchester United, and we also have been at a few dinners together.

“At the level he manages at, he has done a brilliant job everywhere he has been and has got Gillingham competing this year.

“It will not be easy, but I hope, with the quality and the players we have here, we will be able to get ourselves through.”

West Ham are expected to try to strengthen the squad during January, with Benfica midfielder Gedson Fernandes one of several targets.

Moyes, though, feels the current group should take heart from their performance against Bournemouth for the challenges ahead.

“You hope it is a catalyst,” he said.

“The players will be looking at it thinking: ‘well, if we can do that and play like that more often, it will get us moving up the table’.”