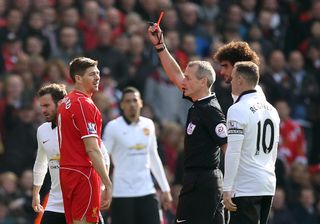 Five years ago Liverpool hosted Manchester United in what was to be Steven Gerrard’s final match against their arch-rivals, with a summer move to Los Angeles Galaxy pending.

Here, the PA news agency looks at how it panned out.

How the match unfolded

Gerrard was named as a substitute for the second successive game as Liverpool boss Brendan Rodgers, who was managing the then 34-year-old’s fitness, opted to stick with midfielder Adam Lallana from the previous week’s victory at Swansea. Juan Mata’s 14th minute goal would only have added to Gerrard’s frustration as he watched from the Anfield bench. The captain got the nod at half-time that he would be coming on for the second half with Liverpool not playing particularly well.

Gerrard replaced Lallana and, as he ran on, Jordan Henderson attempted to have a word. However, it appeared to fall on deaf ears, with the Scouser focused on the task ahead. He flew into a tackle with Mata, sending the Spaniard flying into the air. But the pumped-up Gerrard was not done there, and when Ander Herrera lunged in to steal possession, his opponent lifted the ball over him with his right foot and then stamped on the United player’s right shin with his left. Gerrard waved his arms in disgust as Herrera rolled on the floor clutching his leg, but referee Martin Atkinson was not fooled and immediately produced a red card. Gerrard briefly feigned surprise but did not argue. Just 38 seconds of the second half had elapsed. Mata went on to score again, and although Daniel Sturridge pulled one back, Liverpool – playing better with 10 men – lost 2-1.

Gerrard: "The decision was right. I want to apologise to my team-mates, the manager and supporters" #LFCvsMUFCpic.twitter.com/btA82fLPpp— Sky Sports Premier League (@SkySportsPL) March 22, 2015

Gerrard, having more than 45 minutes to consider his actions, fronted up in front of the television cameras with an apology. “I need to accept it, the decision was right. I have let my team-mates and manager down today, even more importantly I let all the supporters down and I take full responsibility for my action,” he said. Rodgers refused to condemn his captain, saying: “He was probably frustrated watching us in the first half, we didn’t make a tackle. He was man enough to come out and apologise. I won’t criticise him.” Gerrard’s close-friend Jamie Carragher accepted it was in the nature of the player: “Sometimes he hasn’t played with his brain in terms of when he’s done well, it’s been his heart – the (FA) Cup final against West Ham, Istanbul (the Champions League final). That wasn’t Steven Gerrard playing with a cold, calculated head, that was just him playing from the heart.”

What were the implications?

Gerrard served a three-match ban, which saw Liverpool lose 4-1 at Anfield and then beat Blackburn and Newcastle without him. On his immediate return to the team Liverpool were surprisingly beaten by Aston Villa in the FA Cup semi-final at Wembley. Gerrard won just one of his final six matches for the club, including an awkward 3-1 defeat to Crystal Palace on his Anfield send-off and the frankly humiliating 6-1 hammering at Stoke on the final day of the season. Liverpool finished sixth as Gerrard’s storied career at his boyhood club ended in frustration and embarrassment.