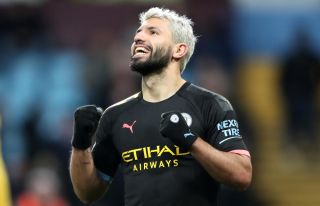 Aguero made history in City’s 6-1 victory at Aston Villa on Sunday, scoring a hat-trick to establish himself as the most prolific overseas goalscorer since the formation of the Premier League in 1992.

The Argentinian also set a new record for the number of Premier League hat-tricks, netting his 12th to overtake Alan Shearer.

“What else can you say?” said De Bruyne. “Sergio has been here for nine years or so and to do that on a consistent basis for that long is… wow.

“I’ve been playing with Sergio for five years and the record he’s got speaks for itself. Off the pitch too the way he acts is really good. He’s not one of these that you hear about all the time – he just plays football.

“I think it’s nice for him. To score a hat-trick and break the record is really nice.”

Aguero’s treble saw him surpass Thierry Henry as the Premier League’s leading foreign scorer, taking his tally to 177 goals in 255 matches and achieving the feat in three fewer games than the former Arsenal forward.

Asked how his City team-mate compared to his old coach with the Belgium national team, De Bruyne said: “It’s difficult, as I know him (Henry) a little bit personally as well.

“It’s so difficult to compare but the records for both speak for themselves. For me, it is not always necessary to compare people. Just be happy and grateful that these guys played.”

Aguero started a Premier League match alongside Gabriel Jesus for the first time since September 2018 at Villa Park, with the Brazilian also getting his name on the scoresheet.

Asked if he would like to see the two South Americans form a strike partnership more often, De Bruyne replied: “They did pretty well, I guess! But I play with whoever I need to play with.

“Gabby was playing on the left side, which he’s not used to but he did really well and scored a goal. But we can change a lot and still perform really well. I think going forward that will happen again.”