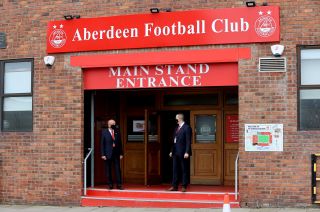 Aberdeen manager Derek McInnes claimed his players had been punished enough for breaking coronavirus protocols ahead of a Hampden disciplinary hearing.

The nine players were charged with two offences: one of failing to comply with SFA regulations and another of bringing the game into disrepute.

Aberdeen had three games postponed after the eight players were instructed to self-isolate after breaking guidelines during a night out at a bar after which two tested positive for Covid-19.

Aberdeen have since won three consecutive games, including a 6-0 Europa League win over NSI Runavik on Thursday night, after which McInnes said: “My players have been dragged through the mud, kicked from pillar to post.

“They have been fined by the club, they have not been in a good place for a couple of weeks.

“It is great to see them out there enjoying the game and doing what they should be doing.

“There is no doubt that my players have been punished enough in my eyes.

“A lot of Scotland, right across the workplace, let their guard down. My players were guilty of naivety rather than them thinking they were above any rules or laws.

“The whole of Scottish football took a check when they saw what my players were getting pulled up for. I think that every club in Scotland has not been squeaky clean.

“We have had to face a lot of things in the last couple of weeks with injuries and suspensions, the whole nonsense that has been going and the embarrassment of that, if there is any more punishment to come then we will have to deal with it.”

The Scottish football authorities promised the Scottish Government it would strengthen penalties for such breaches after Bolingoli compounded the Aberdeen incident and sparked a serious warning from First Minister Nicola Sturgeon, who was already “pretty furious” with the Dons players.

Bolingoli flew to Spain and back without telling Celtic then failed to quarantine himself as required before playing against Kilmarnock five days later.