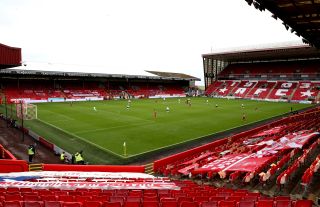 Derek McInnes is glad that Aberdeen will start their Europa League campaign at Pittodrie.

The Dons were drawn at home against NSI Runavik of the Faroe Islands or Wales’ Barry Town United in their opening qualifier and that suited the Aberdeen manager.

McInnes told the club’s official website: “I’m absolutely delighted we are at home.

🔴 We have been drawn at home against either NSÍ Runavík (FRO) or Barry Town United (WAL) in the First Qualifying Round of the 2020-21 Europa League.— Aberdeen FC (@AberdeenFC) August 10, 2020

“We don’t have the advantage of having supporters in the ground and the atmosphere at Pittodrie for European games can be very special but the fact we are at home, without the added complications of travel, is a huge benefit to us.

“We look forward to the game, regardless of which side we will face.

“Any team that qualifies for Europe must play at a certain level and we’ll familiarise ourselves with our opponent as we get closer to the game but we’re looking forward to the tie and hopefully we can have a few boys back before that game comes round.”

Motherwell will host Northern Ireland’s Glentoran or Faroese outfit HB Torshavn in the first qualifying round.

Both Faroese teams are seeded in the preliminary round, with Barry Town travelling to the Faroes and Glentoran at home.

The New Saints, the only other seeded British team in the draw, were paired with Zilina of Slovakia, with the tie set to be played in Wales.

Coleraine will face Maribor away if they see off La Fiorita of San Marino at home in the preliminary round.

The first qualifying round will take place on August 27, seven days after the preliminary round.

All the qualifiers will be held as one-off ties.