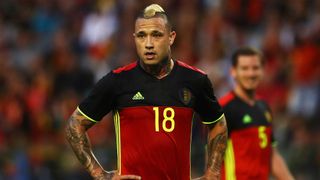 Roma coach Eusebio Di Francesco has challenged Radja Nainggolan to scale even greater heights for the Giallorossi after he was snubbed by Belgium for a second time.

Despite his impressive club form, the powerhouse midfielder was surprisingly dropped by Roberto Martinez for last month's World Cup qualifiers and has again been overlooked for the latest 27-man squad.

The Red Devils have already booked their place at Russia 2018 and time appears to be running out for the former Cagliari man, who missed selection for Brazil 2014, to win back his place.

Speaking ahead of Sunday's clash at AC Milan, Nainggolan's club boss reiterated his admiration for the 29-year-old.

"Technically speaking, Radja is one of the best players in Europe," Di Francesco said.

"Every coach makes his decisions based on the playing system he wants to use.

"I'm sorry for Radja but I hope it motivates him to do even better for Roma. I'm certainly very happy to have him here."

Nainggolan, capped 28 times, threatened to retire from the national team after detailing his frosty relationship with former Everton manager Martinez, who insists his "decision was purely based on football".

The midfielder scored twice at Euro 2016 under Marc Wilmots and has seen his performances reportedly attract the attention of Manchester United.